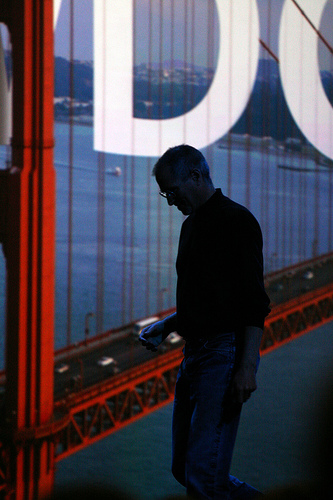 Walt Mossberg: So the two of you have certainly–you’re involved every day with the Internet, you have Internet products, you have a whole slew of stuff on the Internet, you have iTunes and “.Mac” and all of that, but on another level, you’re the guys who represent the rich client, the personal computer, the, you know, big operating system and all that. And there is a certain school of thought–and I’m sure it’s shared by some people in the room–that this is all migrating to the cloud and you’ll need a fairly light piece of hardware that won’t have to have all that investment, all the kind of stuff you guys have done throughout your careers.

Steve Jobs: I’ll give you a concrete example. I love Google Maps, use it on my computer, you know, in a browser. But when we were doing the iPhone, we thought, wouldn’t it be great to have maps on the iPhone? And so we called up Google and they’d done a few client apps in Java on some phones and they had an API that we worked with them a little on. And we ended up writing a client app for those APIs. They would provide the back-end service. And the app we were able to write, since we’re pretty reasonable at writing apps, blows away any Google Maps client. Just blows it away. Same set of data coming off the server, but the experience you have using it is unbelievable. It’s way better than the computer. And just in a completely different league than what they’d put on phones before.

And, you know, that client is the result of a lot of technology on the client, that client application. So when we show it to them, they’re just blown away by how good it is. And you can’t do that stuff in a browser.

I do have one last thing.…What about developers? [applause]…We’ve come up with a very sweet solution.…We’ve got an innovative new way to create applications for mobile devices. Really innovative.…The full Safari engine is inside of iPhone. It gives us tremendous capability.…You can write amazing Web 2.0 and AJAX apps that look exactly and behave exactly like apps on the iPhone. And these apps can integrate perfectly with iPhone services.